A global consumer goods manufacturer hired ECS Solutions to evaluate and install an upgrade of an Ignition Application from Version 7.9 to Version 8.1. Version 7.9 was originally installed by ECS Solutions.  The overall objective for the company was to have a web-based client application that was independent of Java and based on HTML5.  The upgrade included a reconfiguration of the MES software to improve its effectiveness.

The previous Ignition “Vision”-based Application did provide the functionality to monitor Equipment Downtime and Overall Equipment Effectiveness (OEE), but the use of Java within the Ignition modules conflicted with other applications at the site and made it difficult to access throughout the organization.  Migration to the web-based Perspective Platform allowed ECS to significantly lighten the application and to focus on the most important data.  The new version of the Sepasoft OEE module also made it possible to simplify how the workstream was modeled within the Sepasoft Production module.  The company required this application be designed to work with both PCs and iPads.

ECS migrated the production model from the existing Ignition v7.9 Gateway to a new Ignition v8.1 Gateway.  The client wanted to use the Perspective Module as the HMI platform rather than the existing Vision module (which required Java).  The HMI platform allowed easier access to the application since only a web browser was required.  Thus, business/commercial individuals could easily access the application and leverage the data it provided.

The Sepasoft OEE “Perspective” version was released late in December 2020. The client wanted to realize the benefits of the new platform as soon as possible, so development and testing actually began with the Sepasoft “release candidate” version, i.e., a beta version of their Ignition modules prior to the actual version release in December. Taking on the development of the migration with the release candidate version ensured the new application would be ready when officially released by Sepasoft. This required close coordination between ECS Solutions, Sepasoft, and the client.  With Perspective, ECS Solutions was able to deliver a mobile solution with the application available to operators and management on both PCs and on iPads.

A challenging aspect of the project was utilizing the unreleased (beta) version of Sepasoft’s perspective components for the development. This, in addition to an aggressive timeline, meant ECS had to develop and test quickly.  Since migration from Vision to Perspective was necessarily done manually, all graphical objects created for the Vision module had to be re-developed and re-imagined for use with Perspective.

Sepasoft confirmed the existing Sepasoft OEE module version 2.79 could be migrated to Ignition version 8.0.  However, to be current and to take advantage of the latest improvements, Sepasoft recommended migration to Ignition 8.1 using their module version 3.81.

The new 8.1 application is now accessible to the plant personnel simply by clicking a link in an email or web browser.  ECS removed some of the more problematic pieces of functionality in the 7.9 application, e.g., explicitly starting and stopping production runs. The company provided clear directions on their specific user requirements, allowing ECS to develop dashboards and reports to exactly meet those needs. The outcome of the project is a slick application that can easily be run on iPads.

Future considerations for the global consumer goods manufacturer and ECS Solutions will be migrating the remaining workstreams, currently using the 7.9 Vision application, to the 8.1 platform. 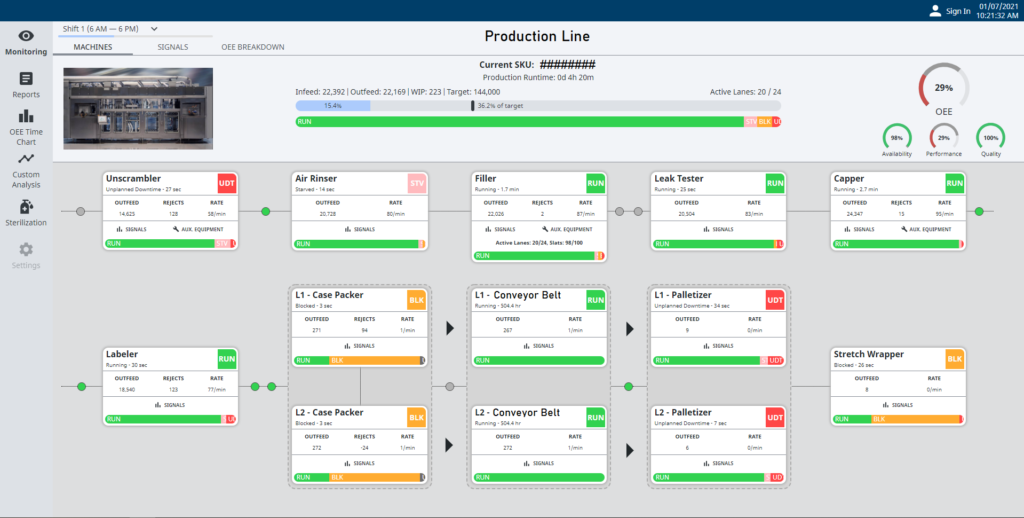